Special: Talk by Wouter Brave
The more recent history of the development of tango in Amsterdam, gets attention during the talk How it all started and why, by our Special Guest Wouter Brave, one of the pioneers of tango in the Netherlands. In 1986 he founded, together with Martine Berghuijs, Mirta Campos en Lalo Diaz the first tango school in the country. This Tangoschool Amsterdam was of great importance in the growing popularity and spreading of tango in the Netherlands. The revival from the 1980s forms the basis of the current tango culture in the Netherlands.
In that light, and also from a practical point of view, this year's program mostly consists of artists who have a connection with Amsterdam. Scheduled after the workshops, on Saturday the 11th of June, 15:00 - 16:00. Doors open at 14:45.

Special: Live music by Juan Carlos Tajes and Christa Mierás
Pioneer singer of tango in the Netherlands, Juan Carlos Tajes will be our host on the opening night, and will also honor us with a short but powerful live music set. He will be accompanied by Christa Mieras on concert piano. Scheduled after the workshops, on Sunday the 12th of June, 15:00 - 15:15. Doors open at 14:45.

Historic Connection
On Thursday 9th of May 2024 it will be 100 years ago that, after a 31-year (!) ban, the first six permits were granted in Amsterdam for dance events in public space. We consider this to be a milestone for the development of dance and tango, in our capital and country. One century of dancing in public in Amsterdam will be celebrated in 2024 with an in-depth program and collaborations with others, such as historic (dance) locations and dance schools. With this first edition of Focus Tango Festival in 2022, we want to give our guests a foretaste.

The Posthoornkerk itself has a historic connection to tango from 1914. Barely a year after the tango was first demonstrated in the Netherlands, during the ban on dancing in public in Amsterdam, which lasted 31 (!) years, a bundle full of complaints against tango was released and sold in the bookstore of the church, on the other side of the street, at Haarlemmerstraat 119. Op tegen de Zedenontaarding! / Up against the depravity of Morals!, is 45 pages long and from page 22 on, it complains that specificly tango is the worst symptom of this decay. This "evil dance" was considered a threat to marriage, and therefor the survival of the church and the state.

Let's get (back) on that dance floor! 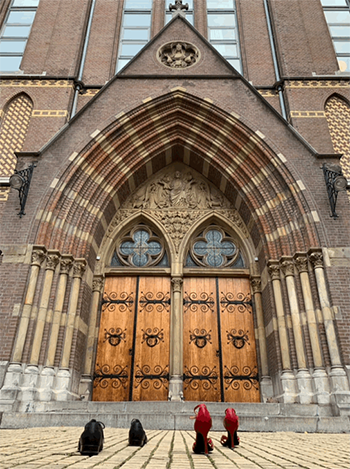